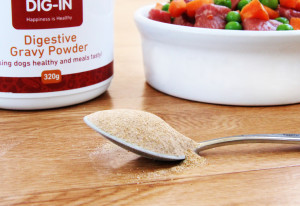 After we developed Dig-In, we ran an in-home 30-day trial to ensure that pet owners could see for themselves the effects that we had seen in our own trials.

The Dig-In trial ran between July and August 2013, over the course of 30 days. In total, twenty one dogs across Australia took part in the trial. Pet carers were asked to mix Dig-In with their pet’s daily meal. Owners were also asked to provide information regarding their pets and their own responses to the product. This information was gathered before the trial commenced, at the 7-day mark and after the trial had concluded.

As with any questionnaire of this type, we sought information on their pet’s acceptance of the food, what the owners thought of preparing the product and if they saw an observable benefit. The last question that is always asked in these studies is the catch all question and the responses surprised us!

Have you noticed anything else that is different about your pet?

Most of the owners reported that their pets were “happier” after they used Dig-In for the 30-day trial.

So we analysed these statements in further depth. Most of the owners mentioned several changes that they had noticed in their pet. There appeared to be several common threads running through the comments, such as increased energy and vitality, more playful, etc.

So we reviewed these responses more closely and here is what we found.

While the last question, which was designed to be a catchall for additional information not covered elsewhere in the questionnaire, it proved a gold mine of new information.

The analysis of the information in this question showed that 77% of owners saw positive changes in their pet’s behaviour and health. This was most notable in the areas of increased vitality (59%), increased food enjoyment (35%) and improvements in allergies (29%).

Here is a selection of their responses we received following the Dig-In trial:

“Shelby is really enjoying her meals and seems more settled scratching is maybe a little less. I would love to try the kibble as well as continuing the gravy.”

“LOVES her meals. Less ‘droopy’ days (is quiet and sooky when not feeling well). While still having eye irritations and mild rashes, they seem to be clearing up a lot quicker, and with less medication required.”

“Bandit is extremely frisky with the two females. Bandit loves his meals and has not been scratching at all. His coat is so soft and shiny as well.”

“Hannibal is extremely active. His coat is super soft and shiny.”

“Seems too energetic. Running around chasing a ball and toys more in the yard.”

“As he is quite old and has had a few health difficulties, it is not easy to be too specific regarding the full effects, but I will say, he manages to come back from a bout of trouble very quickly, and with great stools and lots of quite ridiculous bounce, considering his age!!!!”

“He has been a different dog – so much happier and playful.”

“Not scratching or licking paws as much.”

“He seemed a lot happier.”

While it is difficult to technically quantify ‘happiness’, I think that most owners, who love their pet as one of their own family, will understand.

After all, ‘Happiness is Healthy’! 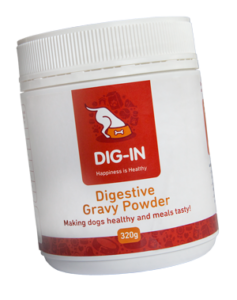 We believe in prevention, not cure!

Dig-In fights against any nasties and builds a stronger immune system to ease the common symptoms of food allergies.