When looking at our pet dog, it may be hard for us to imagine them fulfilling any role other than a loving companion. However throughout history, the humble dog has been eager to serve and prove its worth, and in spite of all our technological leaps, the ever-faithful canine is still at our side ready and willing to do its duty.

Their innate intelligence, exceptional sense of smell and ability to follow commands allows dogs to perform vital tasks in many fields of expertise, such as police dogs, bomb detection dogs, sniffer dogs, guard dogs, guide dogs and many more.
At this point, we’d like to introduce ‘Missy and Taz’. Two gorgeous English Springer Spaniels, with a demanding but extremely rewarding job to do. They are Koala and Quoll detection dogs and they’re the best at what they do. They work alongside the OWAD team discovering evidence of Koala and Quoll populations across eastern Australia – it’s a demanding job and maintaining A1 health is essential.

Dig-In is proud to have played a pivotal role in bringing Missy back to full health so that she can continue to perform her critical job.

We recently caught up with Olivia from OWAD to get a run-through of their experience with Dig-In and learn more about the amazing work that OWAD, Missy and Taz fulfil.

Dig-In: Missy and Taz are beautiful dogs and highly trained, can you tell us a bit about the important work you do and the role of Missy and Taz?

Olivia: Missy and Taz are Working English Springer Spaniels who were both purpose-bred for field detection work. We ourselves are professional ecologists specialising in Koala and Quoll habitat conservation. Missy and Taz are key for the fieldwork component of our studies. Thanks to them we achieve hundred-folds more than other detection methods, quicker cheaper and more accurately. They are instrumental in numerous studies across Eastern Australia that result in the protection of thousands of hectares of native bushland.

Both Missy and Taz are very active dogs with an extremely high drive to work. They can do more than 100km per week while working! Their well-being is therefore paramount and closely monitored.

When we are not on fieldwork, they live with us at home in their very own 5-star resort. It consists of a large and comfortable custom-made kennel which they love, 24/7 access to our safe backyard, and during the day unrestricted access to our pool. On hot days they love throwing a floating toy in the pool and diving in to fetch it, then sunbathing on the deck – and repeat. We changed our pool filtering system specifically so it is more dog-friendly (ozone system), so there are no nasty chemicals that could harm them.

Dig-In: Wow, that sounds like a lot of fun. I mean the pool and playtime, not so much the 100km work week. We understand that Missy was in a spot of trouble a little while ago with her health and Dig-In Digestive gravy powder was able to help.

Olivia: We started using Dig-In specifically for Missy in December 2018. Missy joined us in August 2017 at the age of 5. She had had a litter about one year prior. She was a fantastically devoted mother, however, the pregnancy and lactation had taken a heavy toll on her.

She was physically drained, and we suspect that her stomach lining got damaged in the process. She had a voracious appetite, could never eat enough, yet was really struggling to maintain weight. She also had almost constant diarrhea, and her stool was much too light in colour. Sometimes we would find whole ingredients that she had ingested, that came out virtually intact. Clearly, food was going ‘through her’ much too fast, and her body was barely extracting any nutrients out of it.

Between September 2017 and November 2018 we had tried various things: changes to her diet, various supplements as well as various medications. None of these helped in any significant way.

In late November 2018, after doing yet more research into what may help her, we found Dig-In. We started her on it immediately and have never looked back since.

Dig-In: That’s pretty serious, so much training and care goes into the detection dogs, let alone how much you love them. How did Dig-In help?

Olivia: The first obvious improvement upon starting Missy on Dig-In was that within a matter of days her stools had a better consistency and were darker in colour. We also quickly noticed that there was a significantly longer time lapse between the moment a meal was ingested and when it was expelled on the other end, indicating that her digestive system was now significantly slowed down closer to what it should be.

Within a couple of weeks of starting Missy on Dig-In, she was no longer always voraciously hungry. With the help of our local vet, we have been closely monitoring Missy’s weight since just before we started her on Dig-In gravy.

As you can see, when she started Dig-In she was 11.8kg; at her last weigh-in in October she was a staggering 16kg! That equates to a 36% weight gain in 9 months!

Missy used to be very ‘bony’ struggling to gain or even maintain muscle mass, and her skin used to feel too thin. When you felt her skin and rolled it under your fingers, it lacked healthy fatty tissue.

The weight that Missy has gained over the last 9 months is mostly muscle – which was what we first noticed – and over time, in recent months her skin has now also thickened with now a healthy layer of fatty tissue.

Missy was always a ‘small unit’ for her breeding. We first met her when she was just 2 years old and already back then she looked fairly ‘unimpressive’ so to speak. Today, we can confidently say that she is in the best condition she has ever been in. We recently sent photos of her to her previous owner, a renowned dog trainer, who was positively impressed.

Oh and finally, one last improvement that may make some of you laugh but believe me it has changed our ‘quality of life’.

We get called out across Eastern Australia to help with Koala or Quoll studies. Which therefore means we do lots of driving with our Springers. Because Missy used to have ongoing soft stools, this means she also often had a smelly bum… Which wasn’t the most pleasant when spending 2 full days with her in the confined environment of the car. But no more smelly bums here haha!

Dig-In: Hahaha, Ewwww! Days in a tight space with that bad smell must have been horrible. As gross as that is, it’s also very interesting… we have a lot of Dig-In users that know their pups aren’t right due to their stools, it’s an important area to note for pet health.

Thanks for your time Olivia and best of luck, we’ll make sure to keep up to date with Missy, Taz and all your adventures on your Facebook page.

The OWAD team and the Koala detection dogs do a lot of important work. The demands of the role on dogs Taz and Missy are immense. Sometimes romping over 100km a week in the search for evidence of Koalas and Quolls, the training they’ve undergone, the fiscal and emotional investment in the OWAD dogs is incredible. With such a responsibility on their furry shoulders, optimum health is essential. Dig-In is proud to have played an imperative role in assisting Missy’s return to well-being and maintaining her health. We have no doubt it will help your best friend too!

Love your dog and want to see them healthy, happy and by your side? You can learn more about either of our fabulously healthful products HERE. 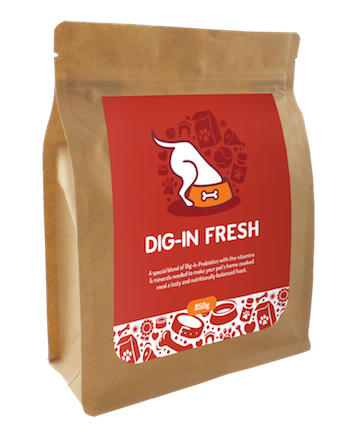 Be 100% sure that your dog's food is, without fail, the BEST thing they can possibly be eating. Includes FREE postage and recipe cards.